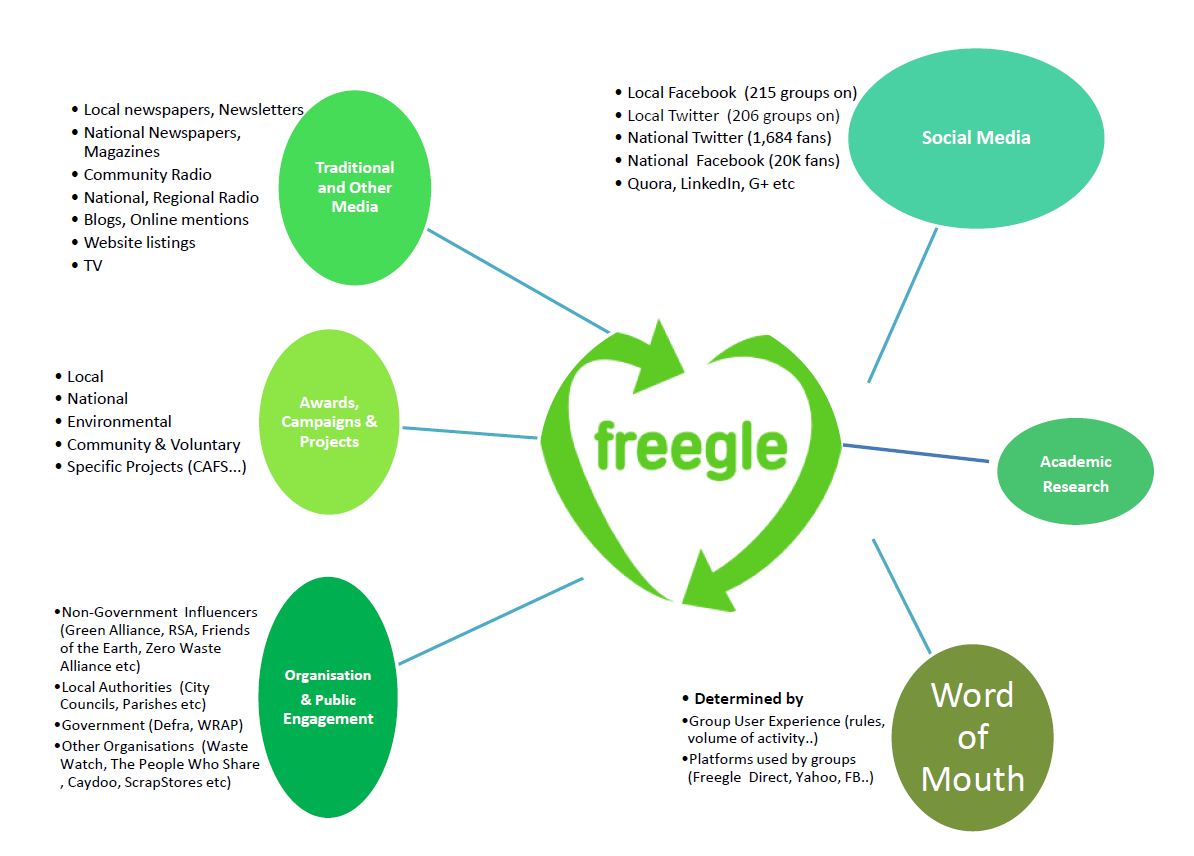 http://twitter.com/#!/thisisfreegle
https://www.facebook.com/Freegle
…continues to be the easy win to attract new people to freegling. It is free to do and has natural networking capability.

We now have 20,000 fans on our National Facebook page, we gain up to 100 new fans each day, these people will be most likely to seek out a local group to use, another good reason to have a FB page for your group, even if you don’t like FB, because new users can then Freegle from FB and start reusing goods easily via your group. The geek team have been fantastic in setting up automated systems to get local Freegle activity fed to social media platforms and a whole lot of other helpful stuff-big thank you! I spend between 10 and 20 hours a week maintaining Freegle social media. A fair bit of ‘customer service’ gets done via social media too. Local groups can easily use social media to promote themselves and get better connected in their local area.

Traditional and Other Media

http://www.ilovefreegle.org/blog/
Big thank you to Peter in London for maintaining this!

We have had mentions throughout the past year in a variety of papers and magazines and this should be increased by more frequent press releases nationally and with more time to follow them up. It would be helpful if local volunteers had contact details for their local media outfits and sent out local versions of Freegle press releases. I have worked on potential TV, magazine features and other articles which have not come to fruition. A few local groups have had successes with local media stories and radio interviews. I have done interviews on BBCRadio5, Shropshire, Cumbria, Sussex, Community and more recently for the USA Public Radio International The World show (also goes out on BBC World Service). Generic Freegle business cards have been sent out by a Reps team (not me!) to local groups who have requested them. This cost was covered by a one off large donation from a Scottish freegler who wished the money to be spent on media matters. We hope the local groups that have received the cards have benefited. Hopefully, this will be continued in 2013 (funds and enthusiasm pending).

Big thank you to Melissa in Eastbourne and Liz in Liverpool for creating a Freegle awards document - it’s a really handy spread sheet! We unsuccessfully entered the Observer Ethical awards, Tech4Good awards, European Awards for Lifelong Passions, Living Labs Global Awards (though we did get invited to go to Rio to deliver a presentation about our submission!) and we failed to enter some awards we could have (Zero Waste, Jubilee and a few others…)

But we were vaguely successful in these:

Entering awards is a form of publicity. If we ever actually won a national award it would get us a lot of free publicity but despite always being the bridesmaid our awards record has definitely helped to get our ‘name’ out there.

I have attended about 80 events, meetings, tele-conferences, seminars, forums, AGMs, workshops and conferences specifically representing Freegle in the past year and another 200 with a partial Freegle hat on (mostly locally). We were invited by Defra to be a member of the inaugural National Reuse Forum and have an influence on national waste policy, strategy and campaigns-this is ongoing and involves trips to Banbury and London. We joined a variety of campaigns: Zero Waste, Waste Less Live More, National Sharing Day, Global Sharing Day, A Good Week and a Picture of Sustainability. We have a relationship with hundreds of people and organisations, everyone from Veolia and Greenpeace to M&S. We are strategically placed to communicate with and potentially collaborate with small and large organisations and campaigns at any time if we wished to. It is literally a full time job to do this task justice…so we do what we can do…and ensure that the concept and value of Freegle and the wealth of grass roots experience we have is shared and known - as best I can do. Approximately £300 of donations has been spent on train fares for me (Cat) to attend engagement opportunities in the past year, I paid all such expenses in the first 2 years. We could improve our relationships with Councils but this is very much down to local volunteers making contact and initiating a relationship it just is not possible for me to do that for 366 groups. Council websites are a trusted signpost for residents to find services like Freegle, so please make sure your group is listed (or featured!) on your local council’s recycling or reuse webpages.

Freegle contributed to several pieces of academic and governmental research, this has involved sharing online surveys with local groups, volunteers and members and some one on one interviews over the phone and in person (with several of the Reps). It is good to be part of work like this as it ensures again that Freegle is noted in statutory reuse studies and other published works about consumers, social change and community-it values our contribution and recognises our impact.

Like lots of things in life, news of Freegle spreads via friends, family and workmates. For this reason it is always good to have an easy to use group, one that can be joined quickly and that encourages group users to reuse –that above all else promotes Freegle best …the rest is all icing on the cake and big picture stuff. Your own happy members can be a great promotional resource.

Big thank you to Richard for maintaining our ‘stories’ http://www.ilovefreegle.org/about/testimonials.php

It would be great to get feedback from local volunteers on what they would like the Media department to focus on or do differently.

There are lots of publicity resources on our wiki http://wiki.ilovefreegle.org/Publicity